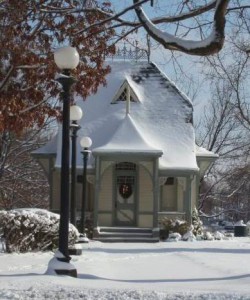 The Haskell Playhouse was built for Lucy Jane Haskell, daughter of Dr. William A. and Florence Hayner Haskell, by her grandfather, John E. Hayner, wealthy financier and philanthropist in 1885.

The playhouse consisted of a single room measuring fourteen by sixteen feet. There is a large front porch and a small back porch on the south side of the house. Inside there is a large wall cabinet with glass doors for the placing of dolls and toys on the shelves. The house also has stained glass windows and ornamental iron work on the roof, plus gingerbread (carpenter’s lace) woodwork around the windows and porches. The architectural style of the playhouse is Queen Anne Stick.

The playhouse was a gift for Lucy on her fifth birthday, July 29, 1885. The next day the Alton Telegraph reported: Mrs. Haskell gave a lawn party in honor of Lucy’s birthday and the children had a delightful time romping, playing, and riding a pony, and were fascinated with the beautiful playhouse and all its attractions.

Lucy Jane Haskell died March 27, 1890, at the age of nine of ‘black diphtheria’ just four years after the playhouse was built.

Following the death of Florence Hayner Haskell in 1932, the City of Alton learned she had bequeathed the large house, the playhouse, and 6.4 acres of ground to the city, to be used as a playground and facility for children. The playhouse is to be retained forever in memory of Lucy Jane Haskell.

The house is located at Twelfth and Henry Streets in beautiful Alton, Illinois.

Listed on National Register of Historic Places in 1974